Stand Up for Freedom Rally - SLC 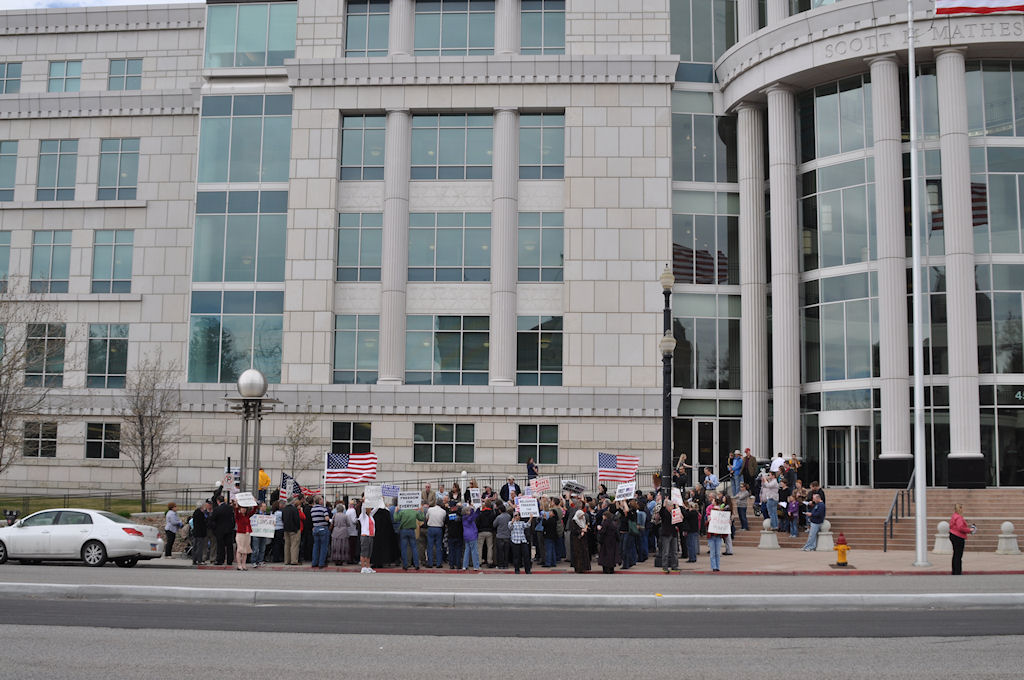 I was really disappointed with the poor showing at the Stand Up for Religious Freedom Rally in Salt Lake. This rally marked the second anniversary of PPACA. The meetings highlighted the fact that government control of health care necessarily stomps on people's deep held religious beliefs.

The event was well advertised and I was anticipating a really big crowd. The Salt Rally was the only event in the state, and the event had speakers traveling from Ogden and Provo.

Sadly, there was only about 200 people at the Salt Lake Event on the steps of the Matheson Courthouse on State Street in Salt Lake. I suspect that more than 200 people walk by the courthouse on any given Friday afternoon.

Since Salt Lake is the headquarters of the LDS Church, Utahans have a tendency to frame issues in a religious light. For example, Paul Mero of the Sutherland Institute dismisses free speech concerns at the City Creek Shopping Center by calling the ACLU "naysayers and Mormon haters." (there are real free speech issues involved when a large group owns most of downtown.)

If defending regilion (not just the mongering of power) really was the driving force of the Church of Jesus Christ of Latter Day Saints, one would expect thousands of Utahans rallying for religious freedom.

For three solid years, I've been trying to find conservative Utahans to talk about health freedom. In three years, I have not found a single Utah Conservative willing to talk about my ideas about defeating ObamaCare. My idea is to promote self-funded health care as an alternative to insurance. It is a very good plan.

Sadly, every single conservative I contact in Utah immediately dismisses me. Pigheaded conservatives who shut their minds to all ideas outside their narrow experience are as much a threat to liberty as are the progressive who seek to take our freedom.

Anyway, the speakers at the event did a great job discussing how the left is using its control of health regulation to lock out people with religious convictions. For example, nurses are given abortion as a litmus test for lucrative health care jobs. (Do you really want the university to filter out prolife nurses? When its my turn to shuffle off to the nursing home, I hope the nurses are pro-life.

IN CONCLUSION: The lack of support at the Rally for Religious Freedom shows that neither Utah nor the LDS Church are reliable allies in the fight for repealing ObamaCare.
Posted by y-intercept at 2:13 PM