Trump and other forms of Low Quality Discourse

The "Trump equal Hitler" campaign has been in the works for the last several months.

The campaign hit with such a fervor last week that I finally relented and looked up the incindiary remark that Trump made to throw the campaign into full swing. Here is the video:

What Trump said is that we should block Muslims from entering the country until congress debates the issue and finds out what is going on. He then cites sonm reports with troubling polls which indicates a troubling amount of radicalization within the immigrant community.

Technically this is a call for debate. Using a bombastic sound bite to start a debate is a rhetorical style. In Marxian theory, it is called a Praxis. Bernie Sanders often lets loose with bombastic statements.

The big question here is if Trump follows through with a quality debate or not.

I admit, I have a certain amount of empathy for Trump on this issue. I spent a solid six years trying to find a group within 500 miles of Salt Lake willing to talk about free market health care reform.

We, as a society, have lost the ability to discuss issues.

Come on world. The United States is in a horrible situation. The Obama Adminstration passed the most intrusive health care legislation in American history and no-one is willing to discuss the mathematics of health care.

In the Bush Adminstratioin, our president invaded Iraq before asking the fundamental question: Is the Islamic world open to Western ideas about democracy.

Bush simply assumed that the people in Iraq were yearning for freedom and would automatically take to the idea of electing their leaders. The actual experience was that tribal warlords set in on each other seeking political dominance.

It is naive to believe that all religions on this world share the same ideals about governmance as Christianity.

From its inception, Christianity drew a distinction between the secular and sacred. The New Testament holds that Jesus Christ was far more interested in individual ethics and the after life than in worldly power. Jesus surrendered unto Caesar what was Caesar's. The message was about individual salvation than a quest for power.

Not all religions make the same division.

To the world's misfortune, the political impulse is for people and groups to grab for all the power that they can get. Notably, in the Roman Empire, the Caesar set himself up as a god.

One finds many religions with a close tie in between the political structure and religion.

Western history shows politicians (in both the clergy and state) eager to jump across the division between the secular and sacred to grab power.

Of particular interest in the English speaking world: King Henry VIII set up the monarch as the head of both church and state.

The truth is that the politically ambitious use whatever is at hand to take and consolidate power.

I live in Utah which is dominated by Mormons. Mormonism is a religion created in the United States. While most contemporary Mormons support a strong separation between Church and State, when one looks at the history of this American born religion one finds politically ambitious people in the movement seeking to establish a theocracy. (Eg, an LDS Prophet named James Strang declared himself king. One can find references of Brigham Young attempting to establish a thing called "The Empire of Deseret" which included a good chunk of Colorado and stretched Southwest to San Diego. Brigham Young held both religious and political authority.

On the otherside of the religious spectrum, most atheists support "secularism." One can find radical versions of atheism which are simply intolerant of religion. Modern atheists committed many of the worst atrocities in history in the efforts to purge religious.

The political impulse is for people to dictate their beliefs.

BTW, "secularism" itself is a paradoxical belief. The Parliament of World Religions had its conference in Salt Lake this year, giving members a chance to interface with people from different religions. Some people in the Parliament seem to be set on creating a new über-religion that incorporates elements of all religion. Is an ecumencial effort to merge all religions into some sort of super religion secular or is it a grab at power?

But that's a future debate.

The number of historical incidences where political leaders sought to use religion to gain power or for religious authorities to use political power to impose their morality exceed the incidences of people trying to separate the two.

It is naïve for the West to encourage wide scale immigration from the Islamic world without addressing the important issue of how the west will assure that the immigrants adhere to the ideals of secularism.

The bombing in Paris and attempts by Islamic groups in the Middle East and North Africa to impose Sharia Law indicate that maybe something is amiss here.

France has bent over backwards since WWII in accommodating Islam. France and Belgium seem to be having more problems with Islam than other immigrant groups.

The picture below came from wikipedia. Assuming its true, then it shows people who are not appreciative of democracy: 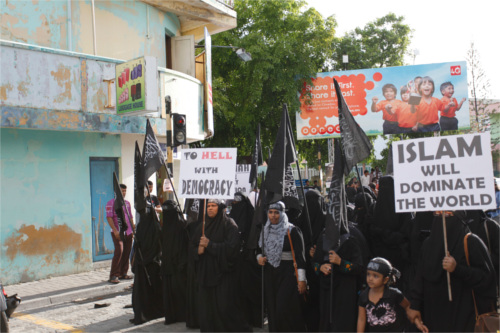 I favor tolerance. But true tolerance must be based on understanding.

Supressing intolerance is an act of intolerance. Yet if a society that favors tolerance fails to address intolerance, the intolerant might come to rule the day.

This is one of a myriad of paradoxes that Hegelian dialectics works upon. People, left and right, jump on the band wagon to supress Donald Trump failing to realize that the spectre of irrational group action is precisely the thing that made Trump's message so appalling.

I want to repeat my remarks above. There were people who wanted to debate whether or not Islam was open to Democratic/Secular form of government before Bush invaded Iraq. In theory, Trump thinks that we should have that debate before blindly inviting large throngs from Syria into becoming citizens of the United States.

I sincerely believe that such debates are good things. Blindly believing that Muslims are good Christians who believe in separating the sacred and secular, we should actually listen.

Many religions and ideologies seem to take well to the ideal of a secular and pluralistic society. Some do not.

Most religions present a mixed bag. Most people favor tolerance, but the politically ambitious have, throughout history, felt compelled to impose their morality on others.

As for my actual feelings about Trump. While I understand why he did what he did, I think his actions show that he is not in tune with the psyche of the American people and is unlikely to be an effective president.

Something has happened to this country which has destroyed our ability to engage in public discourse.

Trump claimed that he simply wants Congress to debate the issue.

That's a laugh. It's been decades since Congress last engaged in a debate. Today's Congress simply a collection of individual fiefdoms full of political leaders who posture as government leaders dictate. Congress has not engaged in serious deliberation over an issue for decades.

Unfortunately, we cannot break out of our disputational malaise through bombastic statements. It has been tried again, and again and again to no avail.

There are things that the right could do to win debates, which I don't have time to develop right now. The approach Trump just tried is doomed to failure.

Trump's little soundbite was trumped by an even louder sound bite with pre-engineered campaign to project the image of Hitler on Trump and the image of the National Socialist Party on the GOP. [BTW, the Hitler campaign is rather funny. The left claims that anyone who stands against socialism is a National Socialist ... but people have such poor education these day that people fall for it.

Our inability to engage in discourse appears to be setting our society up for failure.

We've just seen terrorist attacks in Paris and San Bernardino. Rather than uniting and looking for ways to address the growing international problem if Jihad, our leadership and American press have turned into a full frontal, no-holds-barred, attack on their political enemy---the GOP.

America has lost its ability to engage in rational discourse and that does not bode well for the future.