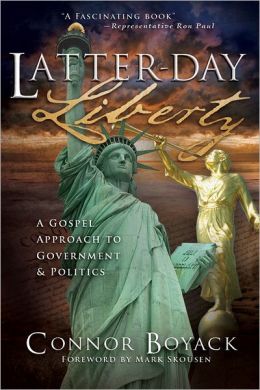 I was extremely disappointed with Connor Boyack's "Latter Day Liberty." I had hoped to read a book like Skousen's "5000 Year Leap" which made a compelling defense of liberty. Boyack's work was dragged down by an excessive focus on group identity and oppositional dialectics.

I would not recommend the work to anyone interested in learning about philosophy of liberty. However, the read provides a good example of how oppositional dialectics undermines freedom.

Connor Boyack's goal in writing Latter-day Liberty is not simply to argue liberty from a Mormon perspective. It is to make the claim that LDS Church is privy to the correct the definition of liberty and virtue and that fellow travelers in the age old pursuit of liberty (such as the US Founders) were deficient in their knowledge of liberty as they were not part of the political hierarchy of the LDS Church.

Latter-day Saints are blessed with an increased understanding of who we are, why we're here on earth, and what consequences our mortal actions have. This knowledge can and should inform the laws and policies we support in earthly government.


As a non-Mormon living in Utah, this claim that one's group identity gives people an increased understanding of liberty and virtue comes off like the pigs of Animal Farm claiming that the pigs are more equal.

Mr. Boyack goes on to explain that this increased understanding is "due to the revelations that we have been given regarding God's plan of salvation and the War in Heaven." (page 17).

Much of this revelation came from a collection of essays by Joseph Smith called "The Book of Moses. The essays are often bundled with "The Pearl of Great Price." This particular work was supposedly translated from Egyptian papyrus purchased from a traveling mummy show. The documents associated with this event were later determined to be common Egyptian funery.

The "Book of Moses" tells us that man had a pre-existence in the Heavenly Kingdom. In his divine plan for the earth, the Heavenly Father set up a conflict between Jesus and Satan and that this War in Heaven is reflected in the war on earth (The Culture War).

BTW, the idea that the heavens are filled with gods and that life on earth is reflexive of the war in heaven is not new. This idea is called "polytheism." It has been common throughout history.

This plan for salvation is that there would be a conflict between the righteous (the members of the LDS Church) and the Servants of Satan ... the people not in the hierarchy also known as gentiles or non-Mormons.

The plan for salvation depends heavily on the concept of "free agency." The Heavenly Father gave man free agency so that they could make the choice between joining the righteous in the political hierarchy of the LDS Church and obeying its command. Those whose hearts are hardened by Satan and who do not use agency to join the political hierarchy of the church and do as they are told are cast out. Mormon free agency is a paradox. You are given free agency to see if you willing do as you are told. Joseph repeats multiple times that those who do not are to be cast out.


Four great principles must be in force for their to be agency:

It just so happens that I read Hegel (1770-1831) before I read Joseph Smith (1805-1844). When I read the writings of Joseph Smith, I was struck by the similarities between Mormon Dialectics and Hegelian Dialectics. This is not surprising. Hegel was the rage in the 1820s when Joseph Smith wrote the Book of Mormon.

To a large extent, Hegel was simply rewriting the "Divine Right of Kings" in pseudo-philosophic speak. Oppositional logic reaches back into antiquity.

The three key elements of Hegelian dialectics are: The use of a conflict driven version of history, The use of oppositional logic, and a paradoxical definition of freedom (sublation).

Mormonism follows this pattern it creates a fantastic conflict driven history of the world: The Book of Mormon tells the story of the Nephites who were pitted against the Lamanites (servants of Satan). The Nephites strayed from the path of righteousness and were eventually pulled into a war of extermination. The children of the conflict were reduced to the "red-savages" now known as native Americans.

In the book The Covenant by Tim Ballard, we learn that The American Revolution was staged by the Heavenly Father and the Constitution was revealed specifically to create the conditions necessary for the restoration of the church which came to Joseph Smith a decade after Hegel. The new revelation came as "The Book of Commandments" which created the United Order of Enoch. Joseph Smith's followers rebelled on and Smith rewrote the Book of Commandments as The Doctrine and Covenant.

Joseph Smith's paradoxical definition of freedom is that people were given freedom as a test to see if they would follow whatever the LDS Church declared to be divine law. Those who do not follow the divine law are to be "cast out." Both the Book of Commandments and the Doctrine and Covenant demand multiple times that those who do not adhere to the dictates of the the Church hierarchy be cast out and denounced as evil.

Mormons actively practice the casting out of people. The lost boys who are thrown out of the FLDS community provide a sensational example of this ideology, but one finds more subtle examples of people caught in double binds in the LDS community.

Mormon dialectics allows the politically powerful to abuse people while declaring themselves the self-righteous defenders of liberty and all that is good.

The dialectics is compelling. People are drawn to it like flies. By employing conflict and paradox, dialecticians can create a sense of ideological impenetrability for a political group. On the whole, history shows that dialectics tends to divide society into warring groups that are completely incapable of communicating with others.

A prime example of the divisive effects of dialectics happens with the paradox of unity. When community organizers use dialectics to unite half a community against the other half, the organizer ends up creating deeper division despite the use of the rosy language of unity.

The Left is notorious for dialectics. The Left routinely labels people and groups "oppressors" then engage in a struggle against their targets without realizing that targeting and struggling against people is oppression.

The reactionaries to the American Revolution sought to preserve the social order of the monarchy and to preserve the peculiar institution of slavery. These groups flocked to Hegelian dialectics. Hegel was the rage in the early 1800s because his dialectics provided a mechanism to justify the behaviors and desires of the politicians of the day.

The dialecticians of the 1800s claimed that the classical liberals (the US founders, et al) had a naive definition of "liberty."

It was the dialecticians of the day who had the bad definition. These intellectual rogues simply built on all possible versions of the freedom paradox.

Anyway, I ended up reading Boyack's book twice. I book left me feeling heart broken. The author is clearly trying to advance liberty, but he is caught in the same binds that philosophers created for us centuries ago.

As for myself, I find that I am stuck here in Utah feeling helpless. I believe that I have things of value to contribute to the freedom movement. When I go to meetings, there is always some shrill voice that has bought into Mormon Dialectics that denounces the thoughts of people outside their group as Servants of Satan.

What is happening to this nation is terrible. The reason we are losing our freedom and devolving in a third world nation is because the intellectuals (left and right) are so mired in their particular versions of Hegelian dialectics that people have lost the ability to talk to each other.

To repeat Mormon dialectics. This doctrine says that Heavenly Father gave free agency through the Constitution and Divine Law through a Book of Commandments (The Doctrine and Covenants) as a test to separate those who willingly obey the dictates of the church. Those who do not are to be cast out. The Mormon definition of freedom essentially boils down to: You are free to obey.

And the pigs are more equal.
Posted by y-intercept at 6:31 PM